In many ways, Metro Atlanta is emblematic of the fundamental demographic and socioeconomic shifts occurring in the United States. Last month, the Pew Research Center released an analysis showing that 78 counties in 19 states transitioned to “majority-minority between 2000 and 2013. Of the five counties that experienced the biggest proportional declines in non-Hispanic white population, four were in the Atlanta region. And on the topic of rapidly rising suburban poverty, Metro Atlanta is often utilized as the poster child: in the past two years, prominent national and international publications such as The Atlantic, The Economist, and Politico have led trendpieces on the topic with anecdotes from Cobb and Gwinnett counties, the two most populous suburban jurisdictions in the region. These changes have profound implications both locally and nationally, and as a Metro Atlanta resident who thinks about community and economic development for a living, they are never too far from my mind.

Yet I still found myself surprised at a recent snapshot of radical changes in the racial and ethnic makeup of the region’s school systems. The Atlanta Regional Commission, the metropolitan planning organization for a 10-county footprint inside a larger MSA, posted to its research microblog an analysis showing enrollment changes from 2000 to 2014 at the 15 public school districts within its service area. The post is brief and well worth checking out, but the upshot is this: the types of changes occurring (minority enrollment up overall, white enrollment down in most places) are to be expected, but the degree to which they are occurring is astounding.

For instance, in a region with just shy of 780,000 students as of October of last year, Hispanic enrollment had grown by more than 100,000 students between 2000 and 2014, with every district posting a gain. Meanwhile, the white population had declined by more than 45,000. A handful of individual districts experienced especially dramatic shifts. As shown in the following graphic, the proportion of white students in Rockdale County declined by 51 percentage points while its share of black students grew by more than 40 percentage points. Proportional declines in white enrollment in excess of 40 percent also occurred in Douglas and Henry counties, while the share of Hispanic students in Gwinnett County increased from 10 percent in 2000 to 28 percent in 2014. (Not coincidentally, Douglas, Gwinnett, Henry, and Rockdale were the four metro counties identified in the aforementioned Pew Research Center analysis.) 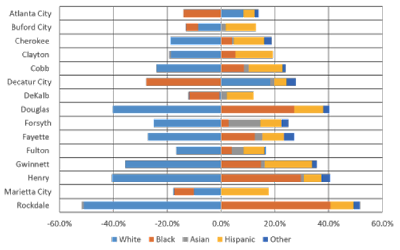 White enrollment grew in just five districts, and these generally fall into two distinct categories – urban and quasi-exurban: the school districts for Atlanta and Decatur (a small city approximately five miles east of the region’s center) are urban areas that have experienced rapid gentrification in recent years, while the Cherokee and Forsyth districts cover areas far from the region’s core that had their development booms much later than the suburban counties closest to Atlanta.* To be clear, those four districts on aggregate still have 22,506 fewer white students than the combination of Cobb and Gwinnett. But it’s not an oversimplification to say that in the new millennium, white populations with school-aged children have grown in the region’s center and on portions of its periphery and decreased everywhere else.** And while all districts have diversified in one way or another, the change has been most profound in suburban districts that were mostly white just 15 years ago.

My guess is that the story is similar in many other parts of the country – that Metro Atlanta is once again a microcosm of the whole. If that’s true, K-12 districts are already faced with a set of evolving challenges and opportunities. Community and economic developers with a vested interest and a strong and thriving talent development pipeline must take note.

* Located at the region’s northwest edge, Buford is something of a hybrid between small town and far suburb that has historically had its own district apart from Gwinnett County Public Schools.

** Interestingly, the trend has been titled more toward the core since the onset of the Great Recession. According to the full dataset from the Georgia Department of Education, Cherokee and Forsyth schools added a combined 13,737 white students between 2000 and 2007, compared to just 1,151 in Atlanta and Decatur. But between 2007 and 2014, things have practically been even, with the urban districts adding 4,065 white students compared to 4,608 in Cherokee and Forsyth.
Posted by Market Street Services at 8:01 AM

Measure of America, a Project of the Social Science Research council, released a report last week on disconnected youth in the United States titled, "Zeroing in on Place and Race." Disconnected youth are defined as individuals between the ages of 16 and 24 that are not in school or working. The report found that 13.8 percent of individuals within the age group were disconnected, which adds up to roughly 5.5 million teenagers and young adults. In some metro areas the percentage of disconnected youth in the community topped 20 percent. One out of every five teenagers and young adults in the community were not working or in school.

Individuals that are disconnected in their youth are more likely to be living in poverty, to be unemployed in adulthood, and to have higher incarceration rates, among other negative outcomes. Their situation sets them behind their peers, decreases their chances of success and self-sufficiency, and has long term implications on the community as a whole with outcomes such as cycles of multi-generational poverty. Additionally, disconnected youth are costing the nation billions of dollars in social assistance, medical care, incarceration expenses, and likewise, lost tax revenue, wages, income, and productivity. Measure of America estimated that the direct cost to taxpayers was $26.8 billion in 2013. 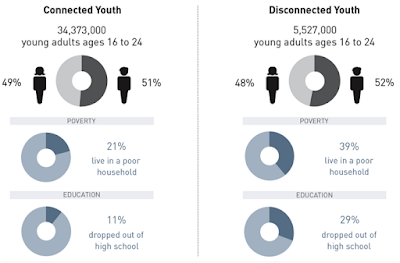 So, what can be done to decrease the number of disconnected teenagers and young adults? Well, there are several strategies that communities can take to engage their disconnected residents, and one option is to get them to volunteer. Opportunity Nation and Measure of America found that volunteerism, group membership, and civic engagement have a positive impact on economic opportunities, upward mobility, and outcomes for the individual and the community. The likelihood of low-income youth to be disconnected if they do not volunteer was 19.3 percent for whites, 27.7 percent for blacks, and 20.9 percent for Hispanics; the likelihood of disconnection with volunteerism drops to 11.9 percent in whites, 17.8 percent in blacks, and 13.0 percent in Hispanics.

The Citi Foundation’s Pathways to Progress, is a $50 million initiative to expand economic opportunities for 100,000 low-income youth in 10 major U.S. cities. One initiative is Service-Works, which partners with AmeriCorps VISTAS and Points of Light. Its strategy is to use volunteerism and civic engagement to develop soft skills, gain leadership experience, and prepare low-income youth for college and career success. Their study found that youth engaged in volunteering are half as likely to be disconnected compared to teenagers and young adults that do not volunteer.

In order to have a prosperous community, residents must be given the opportunity to lift themselves out of poverty and move up the social and economic ladder. Volunteering offers valuable experiences and important opportunities to develop and foster the necessary skills to succeed. Further, civic engagement encourages them to invest early-on at improving their community. The people in a community are its biggest assets, and with the trend of companies moving to where a qualified talent pipeline is available, a strong workforce and community is necessary to compete on the national level for jobs, workers, and residents. Nationally, it is important that individuals are afforded the same opportunities to succeed, regardless of race, ethnicity, or where they grow up.

If we fail to provide these opportunities, we will waste one of our greatest assets and lose out on the productivity and prosperity that could come from these individuals, given the right tools and talent development. Reaching the disconnected youth of your community and reengaging them is important to creating a sustainable, quality workforce and a strong, health community and economy. Increasing civic engagement and volunteerism, alone, will only be a part of the solution, but it is one step that can be taken to at least alleviate some of the problem and provide opportunities for some of the millions of disconnected youth.

To see what percentage of youth in your metropolitan area are not in school and not working, you can find the report at http://www.measureofamerica.org/youth-disconnection-2015/.
Posted by Market Street Services at 1:01 PM

When I was president of the Chattanooga Area Chamber in the 1990s, our chamber, economic development organization, community leaders and elected officials developed a community growth strategy based on sustainable development.

Sustainability was a new term for cities and my friend and city councilman Dave Crockett, an early leader in the movement, helped position Chattanooga as a national leader among sustainable cities.

In 1994, we hosted the first national meeting of the President’s Council on Sustainable Development where Vice President Al Gore called Chattanooga “an environmental success story, not only for the United States, but for the world.”

As a native Tennessean, Gore’s declaration could be viewed as a play to the home folks except that Chattanooga was making quite a name for itself—

Fast forward 21 years and today, almost every leading city in America has embraced sustainability and is committed to prosper with a stronger economy and through environmental excellence.

But sustainable development includes three elements—economy, ecology and equity. How are we doing on the equity front?

Between 2000 and 2013 every state has seen its share of middle-class families shrink, according to a Pew Charitable Trust report.

The current federal minimum wage, $7.25 per hour, has not been increased since 2009. And even though 29 states have minimum wages above the federal minimum, none would qualify as a “living wage” which is typically $10.00-$14.00 per hour.

Sociologist Tali Kristal has documented that the share of revenues going to wages and benefits in manufacturing has declined by 14 percent since 1970, while the share going to profits has correspondingly increased.

Scientific American, in a March 31, 2015 article, “Economic Inequality: It’s Far Worse Than You Think,” paints a pretty bleak picture of America in the 21st century when it says, “We may not want to believe it, but the United States is now the most unequal of all Western nations.”

The article also references an infographic video on wealth income inequality in America that went viral and has been watched more than 16 million times. It’s worth looking at right now.


More than 100 years ago, Henry Ford roughly doubled his workers’ wages to $5.00 a day. “No one loses anything by raising wages as soon as he is able,” Ford said. “Low wages are the most costly any employer can pay.”

“The new wage rate set off seismic shifts in American society,” wrote John Galagher in the Detroit Free Press. “A tidal influx of job candidates from the South and around the world flowed into Detroit. Factory jobs became prized, helping turn America into the world’s industrial colossus.”

In 2015, Walmart raised its minimum wage to $9.00 per hour. Hardly a seismic shift, but the world’s largest retailer is running television ads to say they are “investing in the most important part of our company, our people, because a raise in pay raises us all.”
President Obama has called economic inequality “the defining challenge of our time.” But even if it is just one of the defining challenges we face, it’s time for chambers and economic development organizations to remember that sustainable development is about economy, ecology and equity.
Posted by Market Street Services at 1:12 PM