The Future of Work in Cities

There are some economic development truths that many of us can stand behind—two are that talent is the top issue in economic development today and that technology has changed the landscape of businesses which in turn affects our workforce. Here at Market Street, one of our popular research offerings is our Workforce Sustainability Analysis, where we take a look at a community’s talent strengths and weaknesses, and a component of that document takes on the question of how susceptible is that community to continued advances in automation.

In 2016, the National League of Cities published its The Future of Work in Cities report. In it, they provide a history of shifts in occupations and work trends in America. It also shares the McKinsey Global Institute’s prediction that “15-25 percent of tasks in manufacturing, packing, construction, maintenance, and agriculture could be cost-effectively automated by 2025,” that “commercial—service robots could perform 7-12 percent of tasks in food preparation, health care, commercial cleaning, and elder care by 2025,” and that if technological advance continue at their present rapid pace, “automation tools could perform the work of between 110 and 140 million people globally by 2025.” In addition, self-driving cars will eventually become a threat to truck-drivers.

So what can communities do to prepare for these changes? The last section of this report provides several recommendations for communities to consider. The following are just a select few that Market Street believes in and supports through our work across the country:

There are several other worthwhile recommendations in this report as well as case studies from cities like Pittsburgh and Seattle. If you have a few minutes to spare, The Future of Work in Cities is definitely a must-read!
Posted by Market Street Services at 8:54 AM

Is the American Dream Just a Pipe Dream?

In 1970, the percentage of American 30-year-olds who were earning more than their parents did at 30 was 92%. The percentage now is around 50%. That statistic hit me hard when I heard it on the Freakanomics podcast from January 18th (I got a bit behind in my podcast listening at the start of the year. I’ve been catching up during the last couple of weeks.).

In economic development, I think a lot about upward mobility and improving opportunities for prosperity. I wasn’t very surprised by that 50% number. What surprised me was the 92%. I was in college when the dot-com bubble burst and the job market wasn’t great when I graduated. When I was back on the job market again after my master’s degree in 2008, it was worse. I’ve been listening to people talk about the decline of the American dream my entire adult life. So, I didn’t find 50% surprising. What I found so surprising was that America actually used to be really good at this. Really, really good. Less than half a century ago 92% of 30-year-olds made more than their parents had! My jaw was on the floor. How did we lose so much ground so fast? And, more importantly, do we have any chance of regaining it? 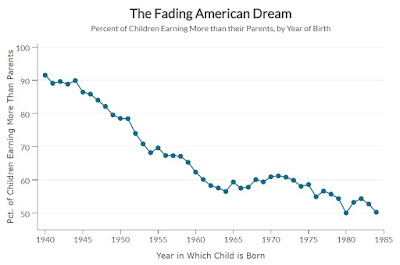 Source: The Equality of Opportunity Project

The Equality of Opportunity Project addresses the first question in a paper from December of last year. They identify two important economic trends affecting incomes of people born in the 1980s relative to those of people born in the 1940s: lower growth rates in Gross Domestic Product and greater inequality in growth distribution. The paper concludes that while lower growth rates in the GDP play some role, it is the inequality in growth distribution that accounts for most of the drop. A smaller cohort of people benefit from growth today than benefited in the 1970s.

This suggests that in order to improve opportunities for prosperity we should focus not just on economic growth, but even more so on spreading the benefits of what growth there is around.

The Equal Opportunity Project recently published work on the role of colleges in intergenerational mobility. There are some really interesting findings in this work, including their list of the top colleges by mobility rate—those who have large numbers of students who come from poor families and end up with high incomes. Topping the list is Cal State University – LA. Nine of the top ten are not-for-profit schools and of those only one is private (Pace University in New York). Four of the top ten are in the NYC metro; three are in southern California; three are in southern Texas.

There is also a list of the top ten elite colleges that enroll the highest percentage of low- and middle-income students. UCLA tops that list, but is the only public school on the list. The data examined in this study confirm what most of us already presume, namely, that low- and middle-income students who attend top colleges end up earning almost as much rich students who attend the same college. Attending a top college seems to really boost an individuals’ chance at mobility. (For more on colleges and mobility, here are a couple articles from The New York Times: “Some Colleges Have More Students From the Top 1 Percent Than the Bottom 60,” “America’s Great Working-Class Colleges,” “Dreams Stall as CUNY, New York City’s Engine of Mobility, Sputters.”)

1) residential segregation – the more segregated a city, by income and by race, the lower the rates of upward mobility

Chetty is quick to point out that while there are significant correlations between the first four factors and rates of upward mobility, we’re still unsure about the causal mechanisms in those cases. But, that doesn’t mean that we can’t use this information to help us create policy that will lead to higher rates of upward mobility—that will help us recapture some of the American dream. And, we don’t need to create policy on the national level to do it. Many of these things can be addressed at the city, county, and state level.

If you want to learn more about the findings, I suggest listening to the Freakanomics episode from January 18th “Is The American Dream Really Dead?” (or you can read the transcript of the podcast on the website). You can also check out these Equal Opportunity Project papers:
And here are some articles from the New York Times based on the data from some of these papers:

You can also check out one of our past posts: “The Growing Threat of Economic Immobility.”
Posted by Market Street Services at 6:30 AM

When defining regions, there are no simple answers

Some years ago, the peace of a lazy Saturday afternoon was shattered by a seemingly simple question: “Is Missouri in the Midwest?”

I don’t recall who asked that or why, but the memory of the “friendly but kinda heated” debate that ensued among a group of friends gathered around a pitcher of beer is indelible. As a former Missouri resident, I took the first stab at answering:

“Well, the Census Bureau puts Missouri in the ‘Midwest’ for statistical purposes, but I always thought of it as being in a different category than, say, Indiana.”

Someone added, “To me, the Midwest is basically the footprint of the Big 10 Conference.”*

To which another responded, “Penn State is in the Big 10 and Pennsylvania is not in the Midwest!”

From there, we were off. We spent the better part of the next hour partitioning the country into regions that made sense only to the person offering up the opinion. The key takeaway: people have opinions about how to define regions and virtually none of them are the same.

I was reminded of this conversation this week when someone retweeted a set of FiveThirtyEight articles from 2014 with the titles “Which States are in the Midwest?” and “Which States are in the South?” The data journalism site partnered with SurveyMonkey to ask these questions of thousands of respondents. Each piece is a quick read, but the following maps FiveThirtyEight do a good job of summarizing the key takeaways: 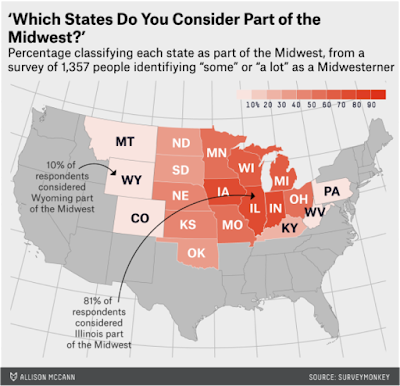 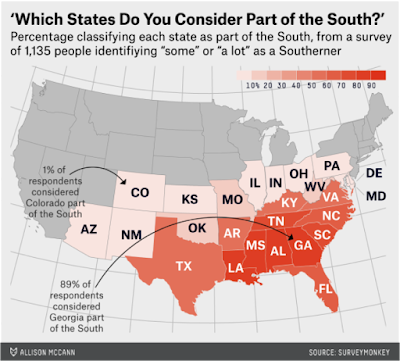 In summary, there is a bit less disagreement about the South than the Midwest, but both surveys produced some amusing (at least to me) results. And interestingly enough, Missouri is apparently neither in the Midwest nor the South according to a majority of people who identify with those regions.

The question of how to define the Midwest is mostly a fun distraction, but the definitions of smaller regions – usually around a metro area – can play a role in community and economic development. For instance, one common question that pops up in communities across the country is: “Why isn’t {Insert County Name Here} in our MSA? Everyone thinks it is part of {Insert Region Name Here}!”

MSAs or Metropolitan Statistical Areas are geographic designations used by federal agencies. The Office of Management and Budget (OMB) is responsible for delineating these regions based on guidelines that it applies to Census Bureau data. Officially, MSAs aren’t formal political designations and they are mostly used for statistical purposes. But they can and sometimes do have an impact on how residents and outsiders perceive regions.

According to the Census Bureau’s glossary, counties within MSAs have “a high degree of social and economic integration with the core as measured through commuting ties.” The OMB Bulletin that explained exactly what that passage means has disappeared from WhiteHouse.gov, but last year I recorded the following bullet points into my notes:

That’s a somewhat more rigorous approach than a survey, but the standards are, in the end, arbitrary. And as previously mentioned, this can lead to some less than satisfying outcomes.

This is mostly unavoidable because reality is messy. Common identities are built upon various economic, political, cultural, and historical considerations that don’t lend themselves to a one-size-fits-all solution. And that’s OK! In fact, one of the things I have always found refreshing and exciting about Market Street is a research approach that allows for a great amount of flexibility in analyzing data and trends within “regions” – however we might want to define them.

* Note that this was before the 2010-2014 NCAA conference realignments rendered farcical most references to regional coverage or membership totals in conference monikers. Never forget that for two years, the Big 12 had 10 members and the Big 10 had 12. Also, if I’m being completely honest, my own conceptualization of United States regions is influenced to an alarming degree by college football conferences as they existed at some point around 1994.
Posted by Market Street Services at 10:07 AM