Food Insecurity Still a Threat to Many Communities

The world recently celebrated World Food Day, an international day of recognition that seeks to raise awareness about the prevalence of worldwide hunger. Even in the year 2015, persistent hunger and malnutrition (especially among children) remains a chronic problem in many countries. According to the World Food Programme of the United Nations, poor nutrition is the cause of death in almost half of the world’s children under the age of five, and one out of six children in developing countries is underweight.

Sadly, it comes as no surprise that issues of hunger and malnutrition are especially acute in developing countries, but food insecurity also affects millions of Americans, and overcoming this obstacle is a community development challenge that is deserving of more attention. The term “food desert” is used by the U.S. Department of Agriculture to describe mainly low-income communities that lack access to reliable sources of affordable fresh produce and other healthy food items. Urban census tracts that are located beyond one mile of a suitable food source and rural census tracts that lack similar access within 10-miles are the distinguishing factors of food deserts. The USDA’s Economic Research Service estimates that 23.5 million people live in food deserts in the United States, and about 2 million of those live in the state of Georgia.

The prevalence of food deserts in the United States is another reminder of the economic disparities that plague the world’s wealthiest country, which unfortunately too oftentimes fall along lines of race and ethnicity. Consider the fact that all of the top-10 most food insecure counties in Georgia, listed by the Robert Wood Johnson Foundation program’s County Health Rankings index, are in majority-minority counties. In my home state of North Carolina, the top-12 most food insecure counties are all majority-minority counties. Unsurprisingly, these counties are also plagued by poor health outcomes like high rates of obesity and diabetes. It has been well-documented by the Centers for Disease Control and Prevention that racial and ethnic minority populations are disproportionately burdened by poor health outcomes, and it’s hard to ignore the impact that food insecurity has on this reality.

Community and economic development is such a broad field that it can be easy to forget how important something as seemingly basic as healthy food can be to the overall equation. A community is only as strong as its workforce, and ensuring that the local workforce has equitable access to affordable, healthy food options is essential to maintaining its long-term sustainability. Expanding a community’s healthy food options can also support the local economy through increased job opportunities, especially via small locally-owned businesses.

Here’s a look at a few examples of community-based food organizations that are helping to meet the healthy food needs of underserved communities:

· Added Value – This organization supports sustainable development in the heart of Brooklyn by promoting urban farming enterprises. Over ten years ago, they developed the Red Hook Community Farm, a thriving 3-acre community farm that sits on an old abandoned school lot. The farm eventually became so successful that it spurred the creation of a farmers market that runs from June-November. Just last year, 20,000 pounds of produce was produced by the farm and made available to local residents at affordable prices.

Through a creative youth empowerment program, Added Value trains and mentors up to 25 local teens per year in a hands-on learning environment that teaches them the value of hard work and healthy foods. The farm also serves as a popular field trip destination for thousands of area students who get an opportunity to hear about the farm’s farm-based learning programs. The employment, mentorship, and learning opportunities made available at the farm are helping to keep high-risk youth engaged in their community.

· Nuestras Raices – The English translation of this group is “Our Roots,” which is an apt description of this community-driven organization that promotes economic, human, and community development in Holyoke, Massachusetts. The organization was created in 1992 by a group of migrating farmers from Puerto Rico who saw a need for community leadership in a community saddled with extreme poverty and economic despair. Putting their agricultural acumen to good use, they started a community garden on an abandoned lot that was previously a hotbed for criminal activity. This one garden created a domino effect and Nuestras Raices now has a network of 12 community gardens with over 100 member families who grow thousands of dollars’ worth of produce on their garden plots each year.

More importantly, the organization has facilitated the development of the social capital and community bonds that are invaluable to a community. Nuestras Raices now operates an environmental program that addresses environmental issues in the community, a youth program that engages youth and teaches them the economic and health benefits of community gardening, and a financial literacy program that teaches residents about the value of home ownership and entrepreneurship.

· Taos Food Center – Located in Taos, New Mexico, the Taos Food Center is a core program of the Taos County Economic Development Corporation. The Taos Food Center boasts over 5,000 square feet of commercial kitchen space and industrial-grade appliances that have served the needs of over 100 small businesses in the Northern New Mexico area over the past 20 years. The Taos Food Center has been both a great economic and cultural resource for the community that has helped to revive rich American Indian and Hispanic culinary traditions and provide economic opportunities to these disadvantaged groups. In addition to the business benefits of the space itself, the Taos Food Center also offers technical assistance services in the form of specialized training, product development, regulatory assistance, and marketing assistance.

Promoting economic opportunity should be an inherent goal of any economic development strategy. Food insecurity is one of the many forms of inequality that plague so many communities across the country. Community leaders need to see the value in promoting equitable healthy food access, especially in low-income neighborhoods, so that all residents can have the equal opportunities they deserve to be productive workers and citizens.
Posted by Market Street Services at 6:00 AM


Last week I was able to attend Moody’s Analytics Economic and Consumer Credit Briefing here in Atlanta. This annual presentation by top economists covered U.S. macro, regional, and consumer credit outlooks. They presented on a wide range of topics, and while there are no guarantees for what the next year holds, economic modeling and forecasting provide greater context to current trends and what expectations are for the coming year. The following is a summary of just some of the topics that were discussed. 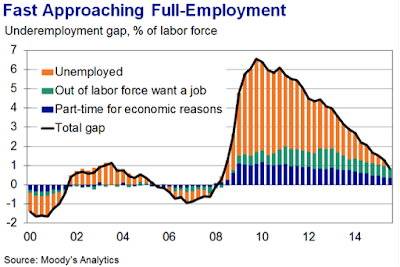 · Labor market indicators suggest that the U.S. is approaching full employment. Recent job growth has continued to outpace the growth in the labor force, as unemployed workers and marginally attached workers are absorbed and the labor market has tightened. The pool of workers is also unlikely to grow as baby boomers retire, which will put more pressure on the labor market.

· Underemployment – individuals that work part-time for economic reasons – is expected to decline as well. The most recent BLS report estimated that there were roughly six million individuals working part-time that would prefer to be working full-time but have been unable to secure such a position, also known as involuntary part-time employment. Another 2.5 million workers were marginally attached to the labor force. Both measurements have been declining over the past year and the underemployment gap has been shrinking.

· Wages are expected to increase as a result of a tighter labor market. Wage growth has been stagnant over the past five years, but as competition for talent and workers increases, additional upward pressure will be put on wages.

Interest Rates and the Housing Market

· In early 2015, roughly 20.4 million young adults (18- to 34-year olds) were living with parents or relatives. As such, the multifamily housing sector is optimistic and predicts that there will be an increase in household formation over the next three years as millennials move in together.

· The median age of millennials is estimated to be 26, which is quickly approaching the average age of homebuyers – 32. They predict that the homeownership rate has bottomed out and will begin to increase as more millennials become homeowners which will create more demand for housing.

Much of the employment growth in the United States has occurred in the West and South, with both regions experiencing steady job gains. Meanwhile, employment growth in the Northeast has been modest but is improving. Employment in the Midwest and Great Lakes region is also improving, and it appears as though the worst is over for Detroit. Recovery will take a while, but its low business costs have spurred increased investment in the area. The labor market in the Midwest is very tight, and wages there will likely be among the first to be forced to increase due to the region’s slower than average growth to its labor force. The drop in oil prices has had a significantly negative effect on the western portion of the Southern states, though growth in the coastal southeastern states remains strong. In the housing market, residential construction permits have continued to increase across all regions, yet growth has also been strongest in the West and South regions.

While the overall outlook in the United States was positive, there are many uncertainties that could alter the projected course. The potential impact student loan debt could have, the risks associated with increased interest rates and its effect on investment, a possible financial crisis in emerging markets, and the recent Chinese stock market crash leave many questions in the air. Nevertheless, Moody’s was optimistic about the outlook for the upcoming year.
Posted by Market Street Services at 11:04 AM

The Economics of Walkability

In the past decade, urban planners have touted neighborhood walkability as a tool to promote public health and smart growth goals and to reduce carbon-intensive travel. In the last couple of years, economic developers have taken notice in a big way. Walkability has become key to economic competitiveness.

As a millennial, I have to say I prefer a walkable community too. I live in Los Angeles so I’m not considering giving up my car any time soon, but when my partner and I bought a house last year we bought in a neighborhood where we could walk to Trader Joe’s (and we always do), the local hardware store, the post office, a health food store, a weekly farmer’s market, coffee shops, restaurants, a great neighborhood bar, the public library, the meditation center, yoga, schools, etc. Walkability was a HUGE factor in our decision. I wouldn’t even consider looking at houses that weren’t within walking distance to at least a grocery store and in the end we bought a smaller house in order to be in the walkable neighborhood.

And, it’s not just millennials:

Talent and start-ups are sort of the holy grail of economic development. We think that if you can attract those two things, you are well on your way to economic prosperity. It stands to reason then, that walkability will positively affect economic prosperity.

A handful of data backs this up:

Economic developers have promoted walkability because it contributes to quality of place and quality of place matters for attracting talent as well as start-ups (who are also concerned with attracting talent). This data suggests that walkability also contributes more directly to economic prosperity by boosting real estate prices and tax revenues.
Posted by Market Street Services at 10:08 AM