The City vs. The Suburbs

Earlier this month, Planetizen ran an article entitled “What Millennials Want, and Why it Doesn’t Matter.” The title was intriguing. We’re so focused on what millennials want—there are multitudes of articles every month detailing new research on what millennials say they want, on what they buy, on where they move, where they travel, their psychology, etc. And, obviously, we think it does matter what millennials want or we wouldn’t be doing so much research or writing and reading so many articles. We think it matters because millennials are the up and comers. They’re the young talent everyone wants to attract. They’re the future of our cities and towns and country. And, there are a lot of them (70 or 80 million depending on who’s counting). Of course we should care what they want. Right?

I had to read the article.

Spoiler alert: it turns out that it does matter what millennials want, surprise. However, and this really was surprising, at least when it comes to housing and transportation preferences, millennials want the same thing their parents and grandparents want these days: not to have to drive so much.

Millennials, like their parents and grandparents, on the whole prefer to live in single-family homes in mixed-use areas where they rarely need a car.

For a while we were told that millennials loved living in the city. In the past year, however, we’re seen a flurry of articles about millennials’ preferences for suburban living (e.g. “Generation Y Prefers Suburban Home Over City Condo” from The Wall Street Journal last year, “Think Millennials Prefer The City? Think Again” on fivethirtyeight.com, and “What if City-Loving Millennials Are Just a Myth?” on the urbanedge blog, just to name a few). One theory is that as millennals get older, make more money, want to settle down and perhaps raise children, they are following the lead of previous generations and moving to the ‘burbs. According to some who hold this theory, the reason so many older millennials still live in cities isn’t because they love city living, but rather that they came of settling-down age in a down economy and couldn’t afford to move to the suburbs. Instead, they stayed in their downtown apartments or turned to more affordable, low-income, in-town neighborhoods and began gentrifying them. Since they couldn’t afford suburbia, they bought the next best thing.

Perhaps during all those extra years in the city in their 20s (compared to previous generations) they got used to the amenities of the city and the ease of walking, biking, and using public transit. According to Ben Cummins, author of the aforementioned “What Millennials Want, and Why it Doesn’t Matter,” it’s not just millennials who want compact mixed-use though. Preference surveys suggest that people of all ages prefer mixed-use neighborhoods to purely residential ones.

The thrust of Cummins’ article is that the majority of people across age groups prefer single-family homes in mixed-use neighborhoods, but most of those people don’t get what they want. Our housing stock is mostly split into apartments and condos in densely populated, mixed-use, urban areas and single-family homes in residential, suburban areas. In the city vs. the suburbs debate, there’s no clear winner. Both have things we want and living in either requires we sacrifice other things we want.

Perhaps this goes some way towards explaining why gentrified in-town neighborhoods are so popular. They typically include single-family homes but are mixed-use. They are often served by public transit and are both walkable and bikeable.

If we could somehow rework suburban areas to be more mixed-use and less car-centric, we might be able to please a lot of people. For the last couple of years we’ve heard all sorts of talk about the death of the suburbs. Maybe it is time for the car-centric, residential suburb to die and be reborn as a more walkable, more condensed, mixed-use suburb. Clearly Americans are still in love with the suburban idea, but the suburbs must change to accommodate changing ideals.

That is, unless the driverless car disrupts this whole desire for walkability and ease of transit and makes the car-centric, residential suburb once again supremely desirable. For more on that, check out Christopher Mims’ “Driverless Cars Fuel Suburban Sprawl” from The Wall Street Journal this week.
Posted by Market Street Services at 2:10 PM

During this week five years ago, Market Street was on its way to Joplin, Missouri, where on May 22, 2011, a catastrophic EF5-rated tornado wreaked havoc. This deadly tornado wiped out entire areas of the city, affecting residents and businesses alike. To assist with post-tornado business recovery, Market Street provided pro bono assistance to the Joplin Business Recovery and Expansion Initiative. During our time there, we learned from the Joplin Area Chamber of Commerce that over 500 businesses were affected in some way; roughly two-thirds of Joplin’s businesses were operating, many in a temporary location; and that the status of over 100 businesses was unknown.

The tornado came on the heels of the Great Recession, which resulted in major challenges for the region. Declining populations in some communities, low average annual wages, high total and youth poverty rates, a relatively larger share of adults with no high school diploma, and the loss of a number of major employers were all issues that the Joplin Region was dealing with.

Five years later, Joplin has emerged as a case study for communities who experience natural disaster. The way the community and its leadership pulled together to overcome this awful circumstance is inspirational. The Joplin Area Chamber and its many partners are to be commended for their steadfast efforts to pull the city out of the debris and focus on its growth and success.

The following charts provide a data profile of the City of Joplin, which is located in Jasper and Newton counties. Because of the timing of the tornado, many of its impacts are not reflected in data until 2012. As the charts and tables will illustrate, Joplin has had slow but steady progress over the five years since the tornado. The city is gaining population and jobs, unemployment is declining, and the number of firms is increasing. However, as is not surprising, there is still a ways to go. Although poverty is decreasing in Newton County, it is increasing in Jasper County. Average annual wages significantly lag behind those of the state and nation, and per capita income has slightly declined.

In the coming weeks, we will to share more insight into Joplin’s post-tornado efforts and highlight the economic development component of their resilience and dedication. 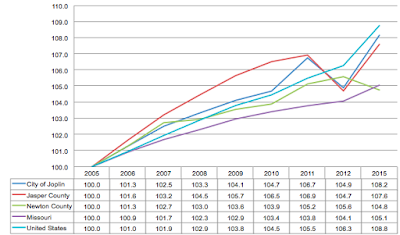 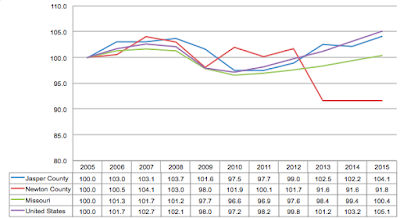 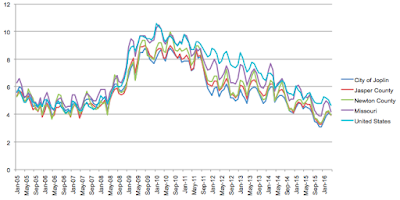 Source: US Bureau of Labor Statistics 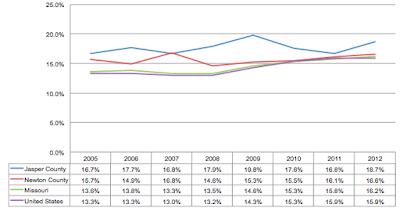 Posted by Market Street Services at 11:21 AM

Relocating a highway can potentially refresh a downtown

At any given moment, communities across metro Atlanta spend substantial sums on transportation infrastructure. Projects vary in size and scope, and include building and repairing roads and bridges, adding entrance and exit ramps, or updating and adding traffic lights.

For the vast majority of people, these investments go by relatively unnoticed. After a year or two, we only remember the inconvenience it caused during our morning or evening commute. We judge their success by how safe we feel on the road and how much less we sit in traffic.

Outside of improving the flow of cars and trucks, we metro Atlantans usually don’t ask more from these investments. There is little expectation that they will result in the wholesale transformation of our community. But every now and again, an infrastructure project comes along that presents local residents with the opportunity to change course and position their community for future success.

In Douglas County and the city of Douglasville, community stakeholders are hoping to seize the relocation of Georgia Highway 92 as such an opportunity. When the project is complete, Highway 92 will brush along the eastern outskirts of downtown Douglasville rather than running directly through it. While highway relocations have typically had damaging effects on downtowns across Georgia – the impact on Douglasville can be different.

At present, many traveling along this stretch of the highway corridor are simply trying to get home, or go to work. They are driving through Douglasville’s downtown, and not driving to it. Once the relocation project is complete, downtown Douglasville, unburdened by commuter traffic, can reassert itself as the soul of Douglas County and establish itself as a regional destination.

The task at hand for our GeorgiaForward Young Gamechangers team, aptly named “Destination Downtown,” was to develop a way forward for, and position downtown Douglasville for, success. It was clear that this process would require the hearts and minds of Douglasville and Douglas County residents to be persuaded that transformation is possible.

We believe the public and private space in downtown Douglasville is anything but inflexible. Our recommendations include engaging in a tactical campaign to spark an open and honest conversation of what its downtown could become both short-term and well into the future.

Our team came up with an encompassing set of big ideas to cement downtown Douglasville as a destination for residents and visitors alike. Our ideas range in scope from creating an inviting gateway corridor that will connect Highway 92 with the core commercial district, to engaging in a community-wide branding campaign culminating in a “grand reopening” event. Finally, catalyst developments promoting a live-work-play lifestyle in downtown Douglasville can help solidify its revitalization.

Metro Atlanta’s transportation investments don’t need to solely impact our mobility. Whatever the investment may be, infrastructure projects allow us to view our built environment in new light and afford us the opportunity to make our communities and the broader region a better place to live. For one metro Atlanta area community, the relocation of a highway has given it the chance to rejuvenate its heart.
Posted by Market Street Services at 8:59 AM