I know it’s probably as exciting as a turkey sandwich the day after Thanksgiving, but I have to write about Amazon. I mean, it’s the only economic development project that’s ever penetrated the national zeitgeist! After 15+ years of consulting on economic strategic plans, my family finally understands what I do for a living. “Oh, like that Amazon thing?” So, yeah, I feel compelled to give my 2 cents on what some have called the “project of the century.”

Whether Amazon’s announcement proves that “spiky” talent hubs will Hoover up the lion’s share of future tech jobs like the New Geography of Jobs’ Enrico Moretti would argue, masks the trend of Silicon Valley behemoths increasingly investing in large regional headquarters outside of California as Richard Florida notes, or, per Conor Sen, opens up new opportunities for lower-cost metros, the long-term effect of the Battle for Bezos will be an evolving discussion.

As Caesar lamented the betrayal of his erstwhile friend and protégé, many regions must feel like Team Bezos has stabbed them in the back. After a massively public RFP garnered 238 responses, a host of ridiculous-in-retrospect publicity stunts, and dizzying incentives packages, 18 of the 20 finalists learned officially on Tuesday – to butcher Soup Nazi – “No HQ2 for you!”

As many have reported, Amazon is essentially ramping up hiring and investment at its two biggest East Coast employment hubs, New York City and Northern Virginia – albeit $2 billion richer for their effort. Potentially to demonstrate that it wasn’t a fait accompli, Amazon also announced 5,000 new jobs in a Nashville operations center. No small potatoes but likely scant comfort to regions wondering if aspiring to “Amazon headquarters” status will ever be a realistic ambition.

Lots of soul searching probably going on in economic development circles right now, and that’s probably not a bad thing. “What do we want to be?” is always the most important question to inform strategic investment. My perspective is that being an incredible Indianapolis is better than being a poor man’s Boston. Fight in your weight class, but train harder than everyone else. HQ2’s legacy reinforcing the primacy of talent, mobility, access, quality of place, regional collaboration, and business climate to compete in the technology economy is likely the most important outcome of this whole HQ2-ring circus. (Okay, I’ll stop with the puns.)

The fact that HQ2 is actually HQ1+1=2 was truly a surprise, mostly because the company’s rhetoric had always been an independent, equal headquarters to complement its home base in Seattle. Who knows if the feeding frenzy of proposals would have been as intense if Amazon had more strongly hinted that a split second headquarters was a real possibility. Of course, my belief is that the two-HQ2 contingency became a more logical internal option as anti-Amazon rhetoric began to intensify over the 14-month process. Even the diminished impact of “only” 25,000 jobs on the two selected sites has been a field day for critics.

Alexandria Ocasio-Cortez, Congressmember-Elect from New York District 14 (which includes Bronx and Queens), tweeted this to her followers: 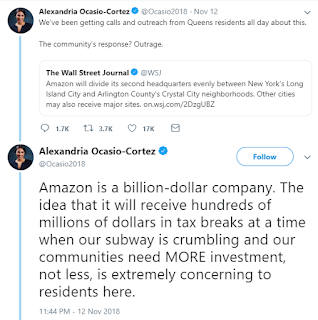 Writing in Citylab, Derek Thompson from The Atlantic not only called HQ2 “shameful,” but argued that Amazonian incentives themselves should be “illegal.”

At the very least, a global spotlight has been shone on the economic development machinations of prospect attraction. What that will mean for the future of mega-incentives deals is anyone’s guess. Truth be told, the industry has been moving away from an attraction-centric model for years now as prospect and project flow has declined and the importance of talent has skyrocketed in the dawn of the Fourth Industrial Revolution. Talent was clearly Amazon’s most important selection criterion.

Rather than throwing the incentives baby out with the strategic bathwater, the tool should be integrated into a truly holistic growth plan that maximizes a community’s competitive position for companies and talent. This is tricky stuff which, as I can now explain to my family at Thanksgiving with fewer blank stares, is why I still have a job.
Posted by Market Street Services at 12:14 PM