Latest Population Estimates Show the Might of the Sun Belt 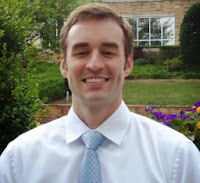 The U.S. Census Bureau recently released the latest population estimates for localities in the United States, and in keeping with trends from recent years, metro areas across the Sun Belt continue to flourish.

Given that everything is bigger in Texas; it is most appropriate that the Lone Star State is adding new residents in significant numbers, thanks primarily to the state’s metropolitan growth. The Houston, Dallas-Fort Worth, Austin, and San Antonio metro areas collectively added 412,467 people between 2014 and 2015. These metros by themselves added more people than any state in the country over the past year except for Texas itself.

Below is a listing of the top-ten metros (out of 381) by one-year and five-year population growth rates. The Cape Coral-Fort Myers, FL metro unseated the Austin, TX metro as the fastest growing metro in the country. Austin previously occupied that position for each of the past four years. 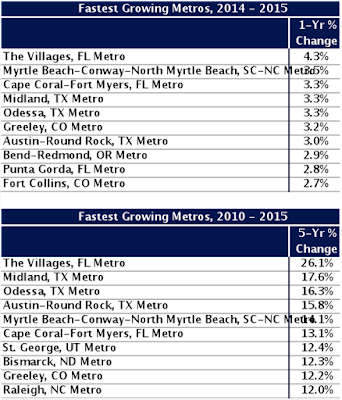 This dynamic is even more pronounced when one-year and five-year population growth rates are isolated to metro areas with at least 1 million residents. 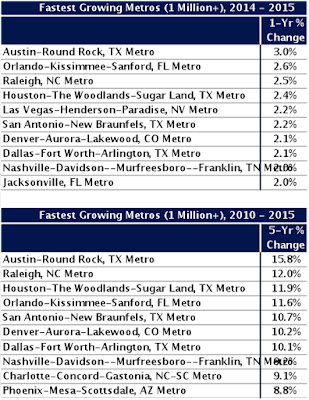 The population growth figures speak for themselves, but another additional layer of the population growth conversation is where these new residents are coming from. The U.S. Census Bureau tracks the components of population change in terms of natural growth (births minus deaths) and both international and domestic migration.

Domestic migration is especially critical to track because it is indicative of how much more desirable certain places within the United States are over others. Domestic migration captures those people who have chosen to move from one city to another. People move between places for an assortment of reasons – job opportunity, retirement, military orders, etc. – but domestic migration is primarily an indicator of economic opportunity, since that is a central reason why and where people move.

The following table again shows the dominance of the Sun Belt region as an increasingly attractive place to live and work. The top metros in the country over the past year and the past five years by measure of domestic migration is a who’s who list of some of the top-performing metro areas in the Sun Belt region. 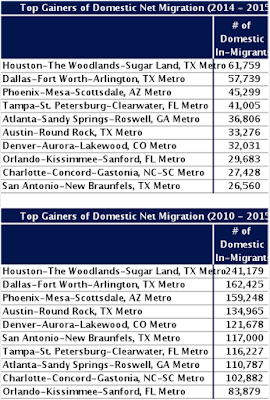 The Sun Belt’s rise can be primarily attributed to the growth of industries like aerospace, defense, auto manufacturing, and oil & gas[1] all of which have thrived in the Sun Belt in recent years. Companies in these industries and others have taken advantage of the low involvement of labor unions in the region, as well as the robust portfolio of transportation assets – ports, railways, highways, and airports – that make many Sun Belt states attractive places for major manufacturing companies to invest.

The Sun Belt region’s rapid population growth has also led to the region’s increased political influence. Since 1970, Sun Belt states have gained over 25 electoral votes and many of the region’s states are evolving into ‘purple states’ as rapid diversification remakes the political landscape in the region.

Much has been made about the declining populations of rural communities across the United States, many of which constitute a large portion of the Sun Belt region. However, as recent population estimates from the U.S. Census Bureau indicate, the region’s metropolitan areas are cementing themselves as booming population hubs that continue to attract new residents in droves.

[1] The downturn in the oil & gas industry and its impact on major Sun Belt metros like Houston is not captured in the recent population estimates. It will be interesting to see if there is any evidence in coming years of the oil & gas industry’s downturn thwarting some of the significant population gains being experienced in that part of the country.
Posted by Market Street Services at 9:41 PM 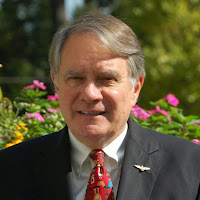 I have always believed that the work of community and economic development required all of us in the work to be professionally non-partisan. When I served four different Governors from both parties, my job was to make that individual and the state look as good as I could. The professional staff in each state worked together across all lines to accomplish what we could.

It has concerned me that over time many states have chosen to appoint political operatives to key economic development positions. While the individuals may be intelligent, experienced, competent people, they have no experience in the field. This is no time for "on the job training."

The reality of the Great Recession and its aftermath is that the game has changed, and that we must be flexible and creative to move our organizations forward.

The history of state level "public private" partnerships is mostly bleak. While Enterprise Florida, the longest standing organization, still exists, it is a far different organization than years ago. It now resides inside the Governor's office and he/she hires and fires the CEO. That privilege was the Board's and the funding was then 50-50 public and private. That is no longer the case. Most of these efforts have lasted only one or two terms and many have conflicted directly with major metro areas’ private sector funding efforts and activities. The recent drastic changes to the strong North Carolina Department of Commerce is a prime example. Whether that state's new "partnership" can be effective or successful is an open question.

As The Metropolitan Revolution reported, the real creativity and actions are coming from Mayors and local chambers and economic development organizations. The relevance of state level programming and operations has fallen to an all-time low. The drastic budgets cuts in most states combined with the lack of professional leadership and extreme partisan politics have combined to produce this reality.

Frankly, it makes me sad since I believe this team sport of community and economic development needs leadership from the state level combined with consistent local public and private leadership to produce the great results we all want.

I am hopeful that we can return to a time when all that really matters is real progress and that partisan politics again takes a back seat to improving the lives of all our citizens. A competent committed professional staff at the state level is a good place to start.
Posted by Market Street Services at 12:00 PM