If Increasing Automation Becomes A Reality, The Impacts Will Be Broad

Confession time: I get sucked into reading a lot of clickbait articles. I believe (or rationalize, anyway) that I am a victim of circumstance. I have a public transportation commute that typically involves about 25-30 minutes of standing on crowded train or waiting for one, and the best way to pass the time is on my phone. It happens.

Lately I’ve been falling for “robots are going to take all the jobs!” headlines. On some level, these kinds of sensationalist pieces are understandable. Let’s say that within the next few decades, a huge portion of existing jobs are lost to automation or increasingly advanced algorithms and are not replaced by new kinds of work for whatever reason. In that scenario, it’s not hard to imagine that every facet of society – economy, culture, politics, and so on – will be radically altered. That’s scary! And that’s why it makes for good #content on certain websites.

To be sure, there are plenty of serious and worthwhile pieces about the “future of work” in an increasingly automated world – Evan Robertson briefly touched on the topic in this post from September. It’s fun to think about the theoretical aspects of these articles and think through the long-range questions they raise. But as an economic development professional, I’m also drawn to some practical questions: what types of occupations are most at risk and how are these jobs distributed geographically?

These are obviously enormous questions that can’t be adequately addressed in this space, but I took a quick initial look at the issue using findings from existing research and EMSI occupational data. The foundation for this brief analysis is a 2013 study from Oxford University titled “The Future of Employment: How Susceptible are Jobs to Computerization?” The authors, Carl Benedikt Frey and Michael A. Osborne, devised a methodology to estimate the probability that 702 occupations can be automated. Each occupation is ranked on a scale with a number between 0 and 1, with 1 representing the jobs that are most likely to be computerized.

I looked specifically at the 171 occupations with a probability of 0.9 or higher. This “high-risk” category accounts for nearly 45 million jobs, roughly three out of every 10 positions in the United States. It includes the nation’s most common job – retail salesperson – and some of its most obscure. (Side note: there are apparently 3,774 bridge and lock tenders in the United States.) A large majority of these jobs, however, were clustered into four major occupational groupings:

The above categories all make sense in light of advancements in fields such as robotics, mobile payments technologies, big data, and machine learning. We might also add a fifth category based on another emerging technology, self-driving vehicles, but while many Material Moving occupations had high computerization probabilities, most fell below the 0.9 threshold. In any case, the diversity of the above categories indicates that no regional economy is completely immune from the threat of automation. In the nation’s 300 largest metro economies by total employment, the 171 “high-risk” occupations account for anywhere between 18.9 and 40.5 percent of local jobs. A further look at the regional economies in which these occupations are most concentrated also reveals a pattern. The following table shows the ten regions with the highest combined location quotient for the 171 occupations: 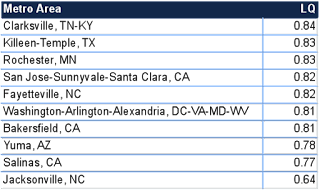 All of the above regions have a location quotient of 1.94 or higher in either the Team Assemblers or Waiters and Waitresses occupation, reflecting a heavy concentration of economic activity around manufacturing or travel and tourism, respectively. Conversely, the following table shows the communities with the lowest concentration of high-risk jobs: 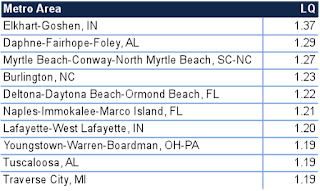 In most of these communities, there is a dominant industry that does not rely heavily on or more of the above 171 occupations: government in Washington, DC, destination healthcare in Rochester, the military in Clarksville, Fayetteville, Jacksonville, and Killeen-Temple, and agriculture in Bakersfield, Salinas, and Yuma. The outlier is San Jose, which has strong location quotients in occupational categories related to computers (4.05) and engineering (3.09). These occupational categories just so happen to contain many of the jobs (e.g. software developers) that are at a relatively low risk of computerization in the coming years.

Silicon Valley is a completely unrealistic point of comparison for just about every other regional economy in the United States. But even in the nation’s premier technology and software hub, more than 275,000 jobs – roughly one in four positions in the region – are in occupations that have a high probability of computerization. Put another way, if impending automation is a concern for a full quarter of workers in the place where a lot of the software is actually being developed, it’s a concern for everyone.
Posted by Market Street Services at 9:14 AM