From there, a distress score is calculated by taking the average of the rankings in each of the data indicators. Then, the geographies are grouped into quintiles: “distressed” refers to the worst-performing quintile, the fourth is “at risk”, the third is “mid-tier”, the second-best is considered “comfortable”, and the best-performing quintile is “prosperous”. This was done for ZIP codes, cities, counties, and states. 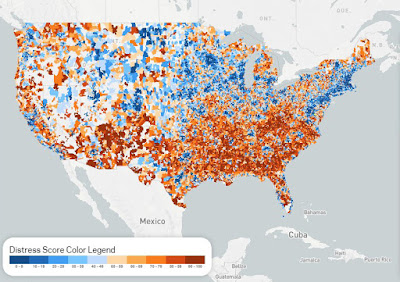 The following are high-level and very intriguing takeaways from the report, shedding light on characteristics of and disparities affecting distressed communities across the nation.

Why does this matter? It’s important for regions to understand intraregional dynamics, understanding that some areas may need more attention, more investment, and different approaches than others. To ensure that communities are thriving, understanding the linkages and likelihood for success of the varying levels of prosperity or lack thereof can help guide solutions. Keeping in mind that quality of place is one of the top two priorities in economic development today, behind only talent, improving distressed communities can only make regions more attractive, thereby making them more competitive for talent and jobs. Take a look at this report for more details of how distressed communities compare to others, and take a look at the website to find out how your community fares.
Posted by Market Street Services at 7:48 AM