Creatively Destroyed: The One Hour Photo and Retraining Workers


A piece of Americana is being destroyed – creatively destroyed. Most of us probably haven’t even taken a moment’s pause to consider the extinction of the entities that once held a predominant place in the nation’s department, grocery, and drug stores. With its banishment, we are approaching a time when a whole generation won’t fully understand why Robin Williams stepped out of his usual comedic roles to star in Mark Romanek’s psychological thriller “One Hour Photo.” I mean, why would you need an intermediary to look at your photos before you upload them to Facebook* – or, conversely, why would you steal someone’s photos when you can anonymously look at them on Instagram?
The one hour photo is a victim of technological change. After all, photos were taken to share with family and friends – it was the “status” update of the 1950s to the very early 2000s. Today, our mobile phones are the cameras. Digitization is the modus operandi.
Yet, this post is not about the passing of an industry lost to technological change. It is about the impact of technological change on our communities and their workers. Creative destruction – whether it is the demise of a one hour photo department or automation replacing workers at a factory – is the natural progression of our continually evolving technological environ. Communities can either be at the forefront of this change or must adjust their local economy and workforce to the shifting economic tides.
Over the last 29 years of my life (i.e. all of it), I’ve developed photos at a store twice – just twice. And it seems that America isn’t as prone to develop their photos at a store either. In 2002, national One Hour Photo (NAICS 812922) employment stood at 11,611 workers. By 2012, total employment stands at just 1,442. An 87.6 percent decline or 10,169 people needing a new line of work. This isn’t an anomaly. Apple, Samsung, Motorola, Nokia, et. al have drastically changed how we take a photo while Facebook, Twitter, Instagram, and Flickr have drastically altered how we share a photo. Without both evolutions,  I’d argue, speedy film development would still be a thing.
The whole photography industry is reeling from improving mobile phone photo quality, digital cameras, and photo sharing. Employment within the photography sector declined 39.9 percent – 96,845 jobs – over the last decade. Barring some sort of technological change or massive alteration to the sector’s business model (see the first footnote), photography employment is vanishing – it transcends decline. The implications for vanished employment vastly differ from general employment decline – the shift is structural, those workers unable to adjust will almost certainly require retraining to make their skills  valuable in the new economic climate.

Source: EMSI
Communities swept up in the changing tides of technology – or business strategy – would do well to first identify the types of occupations facing layoffs. After that, you need to place these occupations into two categories: 1) those that will easily adjust to the changing landscape (i.e. those occupations whose skills will easily transfer), and 2) those who will likely require retraining. If we look at the list below, for example, Parking Lot Attendants, Retail Salespersons, Cashiers, Customer Service Representatives, Office Clerks, and General and Operations Managers could likely transfer to other departments within a store, or find employment within the retail sector.**


On the other hand, Photographers; Photographic Process Workers and Processing Machine Operators; and Mixing and Blending Machine Setters, Operators, and Tenders; represent a wholly different challenge – skills within these occupations are highly tied to the photography sector and will likely not translate well to other business sectors. When skills don’t easily to other economic sectors, intervention is needed – community stakeholders must coax out retraining opportunities. For ease, we’ll just focus in on Photographic Process Workers and Processing Machine Operators (Film Developers).

Source: EMSI
O-Net – a primary source of occupational information provided by the Bureau of Labor Statics – divides an occupation into its three component requirements: knowledge, skills, and abilities. By comparing the knowledge, skills, and abilities of Film Developers with other occupations, stakeholders can identify occupations with the highest retraining potential. Before you identify which occupations make sense, having a full understanding of the strengths of your local economy will greatly aid identification. For simplicity’s sake, we’ll assume your local economy has a strong semiconductor sector. Film Developers and Semiconductor Processors – workers who manufacturer electronic semiconductors – share many commonalities. 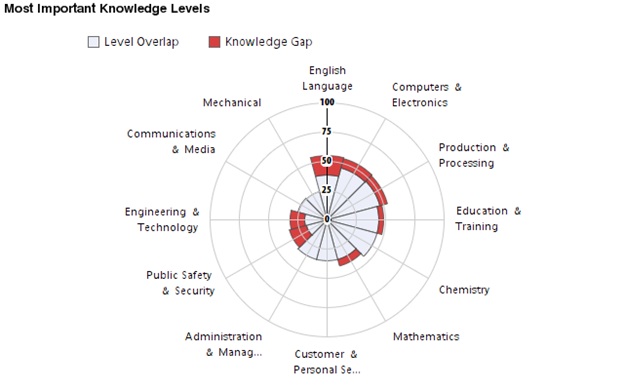 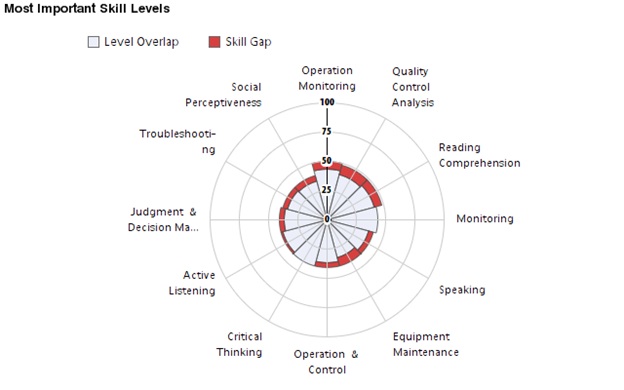 Film Developers’ skills will also need further honing and improvement. Skill development should be formed in conjunction with local semiconductor employers – skills are intricately tied to place. General skillsets that can be improved in the classroom include reading comprehension, speaking, and social perceptiveness. Equipment maintenance, quality control analysis, and operation monitoring are skills better suited for apprenticeship programs or learning labs that simulate the workplace. 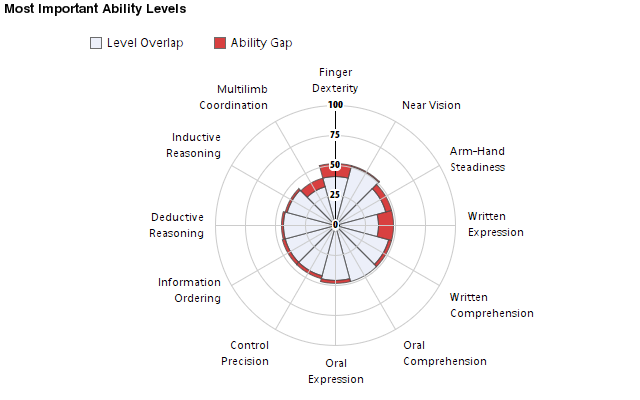 Source: EMSI
Abilities are enduring attributes of the individual that influence performance*** and are far more difficult to teach in a classroom setting – though not impossible. Abilities can be learned and improved over time by repetition. Finger Dexterity, written expression, and multilimb coordination possess the largest skills gaps between Film Developers and Semiconductor Processors, however, few abilities possess significant gaps.
Don’t possess a vibrant semiconductor sector? Well, you get the gist. If your community has been unfavorably impacted by the changing economic landscape, or simply suffered a large closing or relocation, the steps are fairly simple to follow – albeit tough to implement.

1. Be Proactive – start – if you haven’t already – the conversation now. Once the event is announced, you’ll be at a disadvantage. Time is critical. A target sector analysis with a robust occupational evaluation  and economic development strategy is a crucial step in improving the turnaround time.

2. Identify the best use of resources – separate occupations between those that the market will sort out – i.e. those with the transferable skills – and those in which retraining is a must.

3. Identify the knowledge, ability, and skill gaps for each targeted occupation – get advice and insight from employers.

5. Formulate mentorship, internship, or apprenticeship programs for retrained workers – important for “proving” the value of the program to perspective employers.

6. Maintain relationships – this might happen again, so keep the dialogue going.
Identifying skill overlap is time consuming, complex, and requires hefty data lifting. However, informed decisions about worker retraining and retooling can greatly improve the ability of your economy to recover from a mass layoff or significant job loss caused by technological change.

Of course, workforce development efforts combined with identified targeted business sectors and a holistic economic development strategy will greatly assist retraining efforts.  It is about having the processes and relationships to respond to change. It is about building a resilient local economy.

* - Admittedly, this might be a useful service for Facebook’s denizens. Consider this free business advice – I require a small, five percent stake. You’re welcome.

** I’m leaving out Nonfarm Animal Caretakers, I honestly can’t think of any reason why they would be on the list.  I just keep thinking “petting zoos.”

*** Definition via O-Net.
Posted by Market Street Services at 10:53 AM