In August of 2011, I wrote a blog post about film incentives and the ability of the sector to grow jobs. I concluded that the jobs numbers were a poor rationale for continued subsidies, especially in Georgia. I also said that if I ran into “Catherine Heigel, Keira Knightley, or Angelina Jolie,” then I would personally sponsor the next piece of incentive legislation. I would like to revisit the former statement with new data and analysis, but I still wholeheartedly stand by the latter.
The discussion revolving around film incentives has waxed and waned in recent years, but there still remains no definitive answer as to the “worth it factor” of these incentives. The competition for feature films is increasing and international destinations such as Australia (“The Great Gatsby”), Canada (“Godzilla”), and the United Kingdom (new installments of “Star Wars”) are rapidly asserting their ability to compete, especially on incentive packages. As Variety reported, the exodus of motion pictures to other shooting locales has prompted the Mayor of Los Angeles, Eric Garcetti, to state the loss of such films is an “emergency” and at the top of his political to-do list.
One of the areas of the country that has upped its appeal for filming is the Southeast. As the map below shows, Louisiana, Mississippi, Alabama, Georgia, and South Carolina are among the states offering the highest tax credits. The map, which ran in the Wall Street Journal, accompanied a piece on North Carolina’s film incentives, which are slated to sunset in 2015. Rep. Mike Hager, the GOP majority whip, is perturbed by the opportunity cost of $70 million and was quoted as saying, “We could have paid more teachers, kept our teacher assistants, given raises to our highway patrol.” It is unclear whether sunset provisions for film incentives are becoming a trend, but states such as Texas, California, and Nevada have increased their overall funding for incentive programs.
Film Tax Credits available by state, 2013 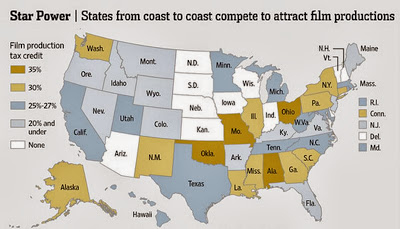 Note: Restrictions on tax incentives vary by state. States differ in the mechanism for paying incentives. Tax incentives may be capped, and also may be limited to specific areas of a film’s budget.
Source: Wall Street Journal, “North Carolina's Film Tax Credits Head for Cutting-Room Floor” via EASE Entetainment Services and Michigan Film Office
In my previous post, I looked at jobs in the motion picture and video sector (NAICS 512) and the onset of incentives programs to see if there were any correlations. The continued loss of jobs in Georgia, even after the beginning of the film incentive program in 2005, was the main takeaway. However, Market Street has recently acquired EMSI, allowing for more in-depth study of different sectors. The following table shows the current status of jobs, earnings, and multipliers for a range of Southern states and California in motion picture and video production (NAICS 512110) and teleproduction and other postproduction services (NAICS 512191).
Impact of the film sector by state, 2013 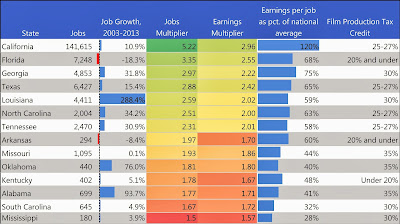 Note: LQ is the “location quotient” and measures the concentration of jobs in the state relative to the nation. A score of 1.0 indicates that the employment has the same concentration as the average community. Location quotients above 1.0 indicate more concentration (and conceivable a competitive advantage).
Source: EMSI
The sampling of states presented in the previous chart reveal some interesting insights. First, much of the rationale behind film incentives relies on the multiplier effect as film activity supports local economic activity. The states with the highest job multipliers are California (5.22), Florida (3.35), and Georgia (2.97), indicating these states are seeing film activity translating into more jobs than in other states. In terms of earnings, California (2.96), Florida (2.55), and Texas (2.42) are the states with the largest multiplier effects. Second, states with the highest film incentives tend to have lower jobs and earnings multipliers. Alabama, Missouri, and Oklahoma offer the highest tax credits (35 percent), but are not seeing as much follow-on activity. Plus, the average wages in these states are less than half the national average for the sector. Third, jobs and earnings are only one way of measuring “impact.” State and local tax receipts are another measure of how well incentives pay off, but the data and methodology tend to be inconsistent. However, according to the Tax Foundation, “every independent study has found film tax credits generate less than 30 cents for every $1 of spending.”
Overall, the film incentive debate is still murky. Higher tax credits are not correlated with more jobs or higher multipliers. But on the other hand, some states are seeing growth and economic activity derived from the sector. What we don’t know, and it’s a central question, is whether or not film incentives are the best option, politically and fiscally. Until we can answer that, film incentives are likely to stay around as long as the Fast & Furious franchise… number 7 is being filmed in Atlanta now!
Posted by Market Street Services at 8:37 AM