Over the next year, it is likely that the topic of the minimum wage will continue to dominate debates at both the national and state levels and in the voting booths. Effective July 2009, the federal minimum wage remains $7.25 an hour. Currently 29 states and the District of Columbia have set minimum wages higher than the federally mandated minimum wage, and many of those increases have happened over the past two years, suggesting a growing demand and need for increased wages for workers at the lowest end of the wage spectrum. As of January 1, 2016, 14 states began this year with higher minimum wages, due either to new laws or to cost of living adjustments.

Today, $7.25 an hour does not go nearly as far as it once did. The real value of the minimum wage has been steadily decreasing since 1968 when the minimum wage was $1.60 an hour. According to the inflation calculator that the Bureau of Labor Statistics provides, $1.60 in 1968 had the same purchasing power as $10.91 in 2015.(1) Stagnant wages and rising prices have left millions of low-wage workers with less money to make ends meet. The nearby figure offers additional context and shows that not only has the minimum wage not kept up with inflation, the costs for basic survival (food, health care, etc.) have continued to rise at even faster rates. While the price for items like clothing and toys have fallen, the cost for goods and services that improve a person’s well-being have continued to outpace the inflation rate. Further exasperating the issue, many of the tools and services needed to lift oneself out of poverty, such as child care and higher education, have continued to become further and further out of reach. 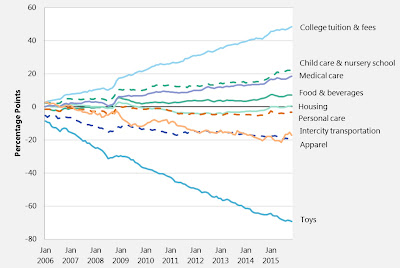 It’s common knowledge that individuals with higher levels of education typically earn more money over their lifetime. Yet for many Americans, especially parents, the child care costs coupled with rising tuition rates and stagnant wages make the possibility of attaining additional training and education, well, simply impossible. In 2014, 14.8 percent of the population was living in poverty in the United States, roughly 46.7 million people, and nearly one in five children was living in poverty. In single mother households, the poverty rate topped 30 percent. Further, contrary to some beliefs, the majority of minimum wage workers are not teenagers. In fact, nearly 80 percent of minimum wage workers are over the age of 20; 30 percent are over the age of 35.(2)

This information is not new, yet the way that some states and policymakers address the declining value of the minimum wage and the impact of low wages on our communities has begun to change in some areas. There are many opportunities to directly affect millions of low-wage workers through policy changes. I’m hopeful that in the coming year we will see more positive changes and continue to refuse to settle for status quo.

(1) Calculated by using the average Consumer Price Index for all goods and services purchased for consumption by urban households.
(2) “Characteristics of Minimum Wage Workers, 2014.” Bureau of Labor Statistics. April 2015.