A decade ago we were talking about young professionals and empty nesters moving to city centers. Now, it seems like everybody wants to be in town. Urban revitalization. Downtown redevelopment. Gentrification. There are all sorts of charts and graphs that illustrate this trend everywhere you look. Here are just a few.

The following chart shows that housing prices in urban centers have been rising 50% faster than those in less central locations since 2000. When the housing bubble burst, that gap was virtually unaffected and it has been growing again since 2013.

And, the rent gradient, which tracks the change of housing prices as you move away from the city center, has gotten much steeper since 1980. People are willing to pay a much higher premium to live in the city now than they were in 1980, when housing prices 15-20 miles outside of the city center were nearly 25% higher than those in town. 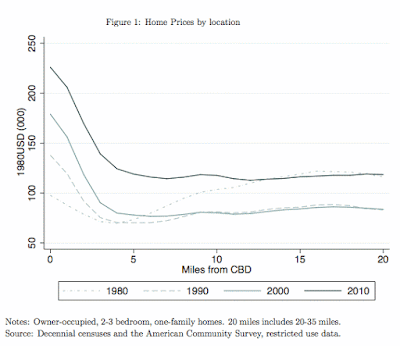 There is a strong correlation between increases in home values and Walk Scores. According to Zillow Talk, the 2015 book by the CEO and Chief Economist of Zillow, houses in walkable neighborhoods have recovered most and fastest. 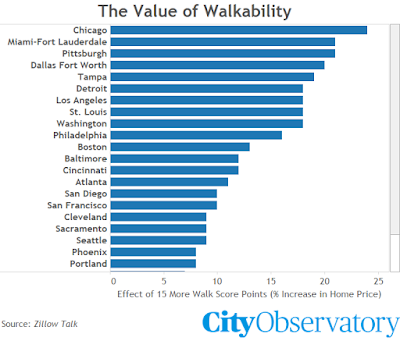 Cities, eh? They’re the big thing. Joe Cortright argues that these charts show that cities are becoming more important to the economic health of the country. The 20th century saw a residential exodus from city centers, but the residents have returned en mass in the 21st. There are more people who want to live in walkable, transit-served, urban neighborhoods than there is housing in said neighborhoods. There’s a lot of talk about how to create more great, urban neighborhoods.

Here’s what no one is talking about: the ‘burbs. The car-dependent, 1/4 acre lots situated on safe cul-de-sacs, tucked neatly around 18-holes of golf, swim, and tennis; the big-box stores; the economy-sized-box stores; the malls; the shopping plazas; the asphalt seas of parking spaces.

The only people who are talking about the suburbs are asking if they have a future.

After the housing bubble burst and people abandoned the homes they couldn’t sell or were forced out in the process of foreclosures, we got a glimpse of a future of the suburbs: McMansions with boarded up windows, dead grass, pools full of algae. Empty driveways and garages lead to empty shopping plazas, dead malls, and overgrown golf courses.

Is it really the end of an era? Will the suburbs someday look like abandoned gold rush towns? The physical remains of a once booming idea of utopia?

Planetizen blogger Michael Lewyn wrote last week that some suburbs do have futures, but only some.

So, what about the suburbs? The utopian dream of Frank Lloyd Wright was suburban. The whole point of suburban expansion was an escape from the dirty, crime-ridden city to a dreamland where everyone could have their own greenspace. Who needs a pocket park down the block when you've got a yard?

Suburbia was the darling of the urban planning world in the 20th century. Cities were crowded. People wanted space and fresh air. They found it in the suburbs.

But, that's just not true. Plenty of people like living in the suburbs. Especially people with kids. And, the fact is, cities still have higher crime rates and they're still crowded.

So, while we’re thinking about how to create more great, urban neighborhoods, let's not forget about the suburbs, where scores of people choose to live. Can we make suburbia more appealing? Can we bring some of what people love about living in the city to the suburbs and still keep what people value about suburban life? How do we make sure our suburbs don't become ghost towns? That's something we should be talking about.

In the interest of full disclosure, I should add that I do not live in the suburbs... not exactly. I live in the city of Los Angeles. It's not the golf course subdivision where I was raised in suburban Atlanta and I live in a "very walkable" neighborhood (according to walkscore.com), but I am nevertheless car dependent for some things and I love my yard.
Posted by Market Street Services at 6:30 AM